Ghost shark appears in the deep 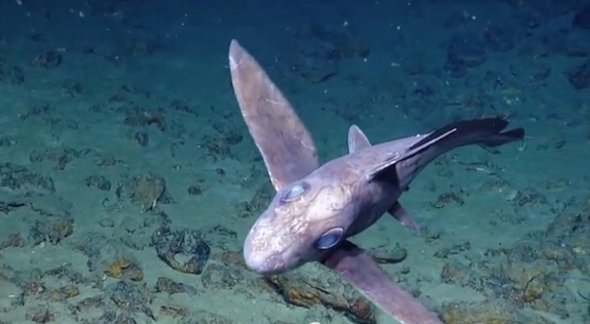 ST.GEORGES (GRENADA)- Researchers found the elusive ghost shark in the deep waters off the Caribbean isle of Grenada. The creepy looking shark has bright blue transparent eyes and a slightly sinister grin.

The footage was captured by a remotely-operated submersible vehicle that had originally been sent down to explore an underwater volcano, known as Kick’em Jenny, off the coast of the Caribbean island of Grenada. Ghost sharks, also known as chimaera, could be the oldest and most enigmatic groups of fishes alive today, according to some.

The chimaera is a species of its own, with their closest living relatives being sharks, though in evolutionary terms, they branched off from sharks nearly 400 million years ago and have remained isolated ever since.

Chimaeras live in temperate ocean floors down to 8,500ft deep, with few occurring at depths shallower than 660ft, and can grow up to 4.9ft in length.