Sharks on top of the menu for alligators 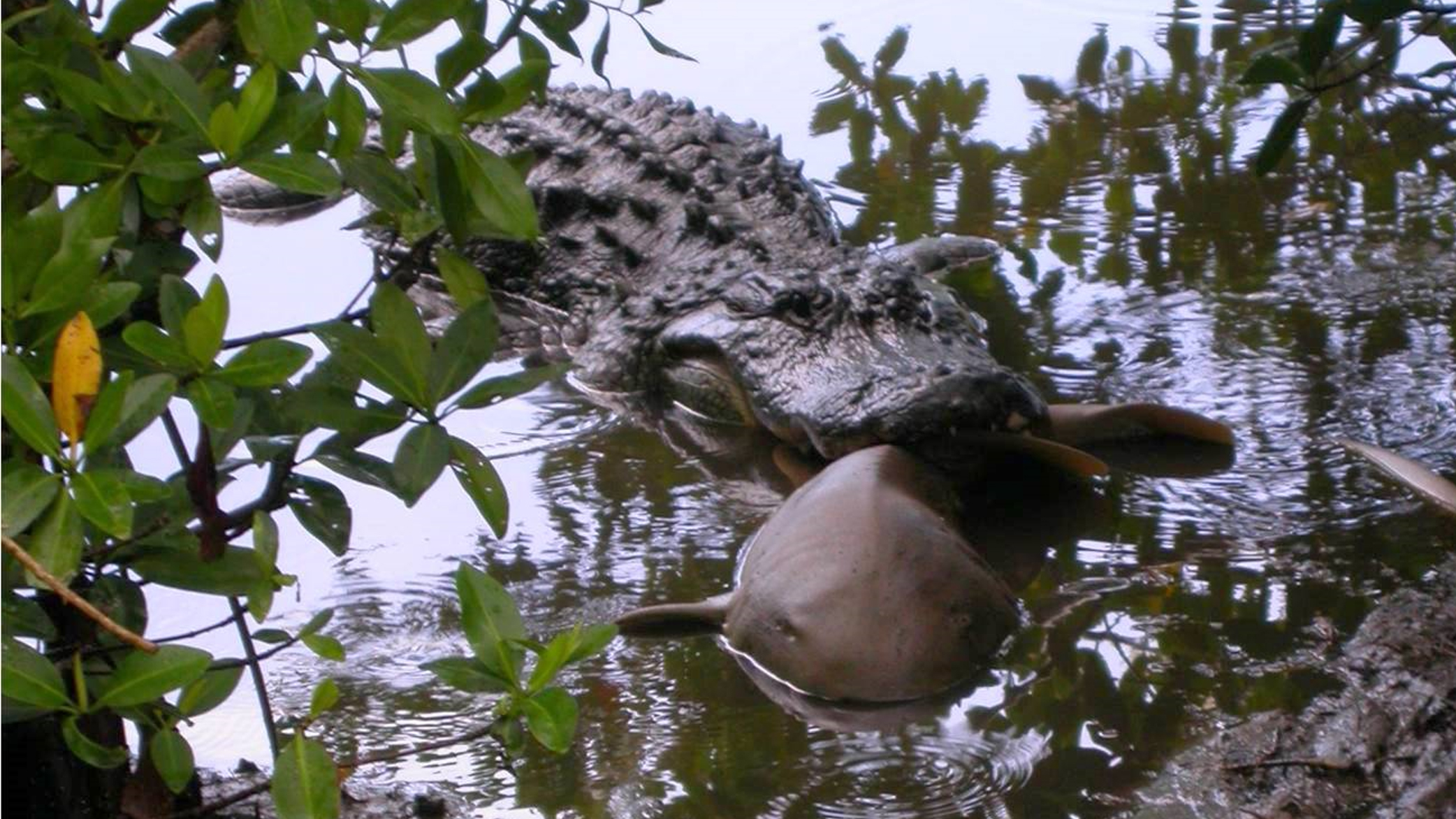 MANHATTAN (USA)- Who’s got the biggest teeth? Sharks or alligators? Who’s the baddest? Kansas State University researchers found out that four species of sharks and stingrays are prominent on the menu of the big reptiles.

While the sharks may not actually be as big as the great white or tiger shark, James Nifong, postdoctoral researcher with the Kansas Cooperative Fish and Wildlife Research Unit at Kansas State University, and Russell Lowers, wildlife biologist with Integrated Mission Support Services at Kennedy Space Center, published a study in Southeastern Naturalist documenting that American alligators on the Atlantic and Gulf coasts are eating small sharks and stingrays. This is the first scientific documentation of a widespread interaction between the two predators.

“In the article, we documented alligators consuming three new species of sharks and one species of stingray,” Nifong said. “Before this, there have only been a few observations from an island off the Georgia coast, but the new findings document the occurrence of these interactions from the Atlantic coast of Georgia around the Florida peninsula to the Gulf Coast and Florida panhandle.”

“Alligators seek out fresh water in high-salinity environments,” Nifong said. “When it rains really hard, they can actually sip fresh water off the surface of the salt water. That can prolong the time they can stay in a saltwater environment.”

An alligator’s diet typically consists of crustaceans, snails and fish, but because alligators are opportunistic predators, Nifong said sharks may end up on the menu.

“The findings bring into question how important sharks and rays are to the alligator diet as well as the fatality of some the juvenile sharks when we think about population management of endangered species,” Nifong said.

As part of Nifong’s dissertation research, he pumped the stomachs of more than 500 live and alert alligators to learn more about their diet. Researchers also equipped the alligators with GPS transmitters to watch their movements and found that alligators travel between freshwater sources and estuaries, which are a partially enclosed coastal water body where freshwater and salt water mix and house shark nurseries.

“The frequency of one predator eating the other is really about size dynamic,” Nifong said “If a small shark swims by an alligator and the alligator feels like it can take the shark down, it will, but we also reviewed some old stories about larger sharks eating smaller alligators.”

Large masses of sharks and alligators

Nifong dug into history and found news reports from the late 1800s that described battles of large masses of sharks and alligators after flooding and high tides washed the predators together. One particular historical incident included in the journal article described how the sharks were attracted to blood from alligators feeding on fish. When the alligators were washed out to sea, the sharks attacked.

Nifong conducted the alligator diet research as part of larger research of freshwater river systems and food web dynamics. He currently is researching the drivers of native fish biodiversity in the Neosho River Basin for Martha Matter in the Kansas Cooperative Fish and Wildlife Research Unit, a part of the Division of Biology at Kansas State University.