Today, WWF released its Living Planet Report, stating that 68% of the world’s animals has vanished between 1970 and 2016. Another study a few weeks ago showed how illegal and irresponsible fishing has left sharks ‘functionally extinct’ in many of the world’s reef ecosystems. Protection seems more urgent than ever! And protection works.

According to the WWF report there is hardly any place left in the vast endless waters of our oceans that remains untouched by humans.  Only 13% the world’s oceans is considered to be wilderness. Even in deep ocean trenches waste and marine litter are found. ‘The negative effects of these impacts threaten the goods and services – such as food provision, climate regulation, carbon storage and coastal protection – that marine ecosystems provide to human society, and upon which we all depend’, WWF states.

The greatest impact on ocean biodiversity is still fishing for human consumption, causing one in three fish stocks assessed to be considered overfished, and leading to the unintended bycatch of species such as sharks, seabirds and turtles. According to the WWF the populations of blue sharks in the Mediterranean declined by 74% in the last 46 years.

The study by Aaron MacNeil, Demian Chapman and Joshua Cinner, published at the end of august, confirms this as well. The researchers found a strong relationship between reduced shark numbers and the proximity, density and poverty levels of the nearest human communities. Sharks are hunted for their meat and fins, which are a sought-after delicacy in some countries. But many are simply in the wrong place at the wrong time, ending up as by-catch in fishing nets set for tuna and other fish species or caught up in drifting ‘ghost nets’ long abandoned by fishermen.

Using video footage taken at more than 370 reef locations in 58 countries, the three researchers assessed the conservation status of sharks in different parts of the world. The study’s results, published in the scientific journal Nature, show an absence of sharks in 20% of the reefs surveyed. The reason? Destructive and unsustainable fishing techniques – sharks have few offspring and mature slowly, leaving them vulnerable to overfishing.

Sharks are essential for the health of our oceans. They help maintain balanced ecosystems. Having few natural predators, sharks limit the populations of their prey, switching from one food source to another depending on what’s available. This ensures biological diversity by preventing one type of prey growing too dominant and disrupting things further down the food chain.

International protection, like marine conservation areas, fishing restrictions and trade legislation, is the only way we can protect and preserve sharks. The study shows that protection works. Sharks were found to thrive in countries that enforce marine protection areas, which prevent commercial fishing in certain places or for particular marine species. Shark fishing has been banned in the Bahamas for more than three decades, for example, helping the country lead the world in shark abundance, according to the report. The WWF report shows that following the creation of a marine protected area at the Ashmore Reef in Western Australia, the abundance of grey reef sharks increased by more than 360% between 2004 and 2016.

Effective marine management can include regulating fishing activity so sharks are caught less frequently, either intentionally or as collateral catch. Alternatively, legislation could be enforced banning harmful fishing techniques: gill nets are almost invisible to the multitude of marine species they entrap; and long-line fishermen trail hundreds or sometimes thousands of hooks in the water for long periods to catch fish indiscriminately, a technique which could be replaced with a more targeted approach. 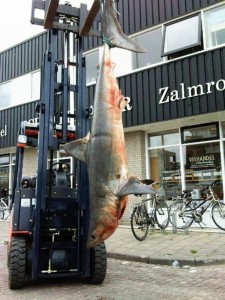 Similarly, the US and EU have enforced bans on the practice of removing shark fins at sea then discarding the carcass, reducing catch numbers by insisting the whole fish is brought to shore before removing the fins.

Yet the illegal trade in shark fins persists. And enforcement in open waters remains a challenge, as was demonstrated by the Chinese fleet that fished in the protected waters off the Galapagos Islands earlier this summer.