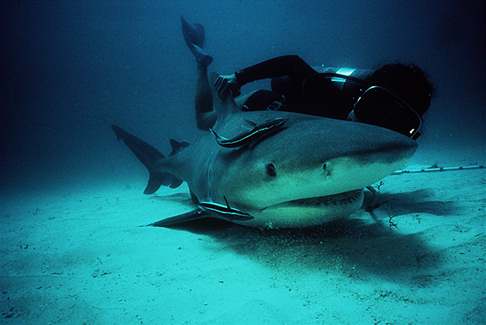 SARASOTA (USA)- She was one of the first women in a macho world of diving with sharks. Nonetheless she became a world authority on sharks and fish. Dr. Eugenie Clark, aka the “Shark Lady” and the founder of the Mote Marine Laboratory & Aquarium, has died, according to Mote Marine. She was 92. Clark, who became a world authority on sharks and fish, built the Mote Marine Laboratory in 1955, according to information on its website. The center was then called the Cape Haze Marine Laboratory, and was created and supported by the Vanderbilt family as a facility to research oceans and share the information.

Her one-woman operation grew into a research lab with seven centers for research.

Dumb and deadly sharks
According to the National Geographic, Clark began her research on sharks in the 1950s and before then the animals were considered both dumb and deadly. “After some study,” she said, “I began to realize that these ‘gangsters of the deep’ had gotten a bad rap.”

Cousteau
Clark was the first guest scientist on Jacques Yves Cousteau’s TV show “The Undersea World of Jacques Cousteau” because he wanted to start with sharks, she said in an interview with WTSP.

The Mote Marine facility also holds a key to the future, she said.

“I think the Mote lab particularly has a great message, we tried to understand and learn about the sea, but now we have to learn to protect the sea, there are so many dangers to sharks and the marine environment.”

She was a research assistant at Scripps Institution of Oceanography, at the New York Zoological Society, and at the American Museum of Natural History in New York.