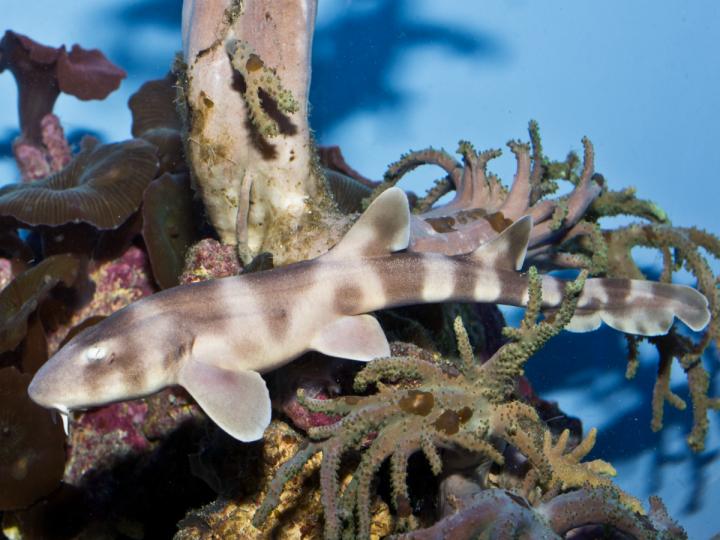 When one viable egg resulted in the birth of a healthy pup, Academy scientists set out to examine this unprecedented example of sharks’ long-suspected (but little-documented) ability to store sperm over long periods of time. Their results, published in the Journal of Fish Biology, mark the longest documented case of sperm storage in any species of shark, and highlight a bright bit of news for the future of wild sharks threatened by overfishing and habitat loss.

The Academy’s scientific investigation began in 2010, when a curious biologist wondered whether any of the shark egg cases regularly found in the aquarium’s Shark Lagoon exhibit might be viable. Much like the hens that lay our breakfast eggs, many sharks are known to produce unfertilized eggs. Biologists transferred several brownish egg cases from the Lagoon into a separate incubator on public display, where two of the eggs showed signs of healthy embryonic development. While one egg failed to develop successfully, the other flourished. On January 21, 2012, a healthy bamboo shark pup emerged from its egg and began its life at the Academy’s Steinhart Aquarium.

A team of Academy scientists–including Rocha and Veterinarian Dr. Freeland Dunker–were left to investigate how this seemingly unlikely birth may have occurred in the absence of male sharks.

Only females
“It’s highly unlikely that the bamboo sharks mated with another individual in the aquarium,” says lead author Moisés A. Bernal, PhD candidate and researcher in the Academy’s Ichthyology Department. “All of the other sharks in the Lagoon are female. There is one male Javanese cownose ray, but mating between sharks and rays is only a very remote possibility.”

Two guesses were more likely: either a female adult shark reproduced asexually in a process called “parthenogenesis” (as has been observed in four different shark species), or it had stored sperm from its last mating event several years before the fertilized egg appeared in the Lagoon. Aquarium records showed that the Academy’s three female bamboo sharks–each a possible mother to the new pup–had no contact with compatible males since their 2007 residence at the Aquarium of the Pacific in Southern California.

Genetic tools
Armed with highly advanced genetic tools, scientists headed to the lab to solve the mystery of the brownbanded bamboo pup. Dunker and his veterinarian team removed tiny DNA-packed slivers from the fins of the pup and the three potential mothers during their annual physical exam. Researchers used this DNA to craft genetic profiles for each individual, and ran them through a series of genetic tests for comparison. In a strike against the asexual reproduction theory, the shark pup displayed comparable results with each female on a particular genetic test that looks at genetic variation within an individual. If the mother had reproduced asexually through parthenogenesis, the offspring would have shown less genetic variation than that of its mother.

The pup also displayed genetic material–in the form of 32 alleles, or parts of genes–absent from all three adult females. Study authors concluded that the young shark most likely inherited this “mystery” genetic material from its father–an unknown male from the long-ago tank at the Aquarium of the Pacific.

While the new study results are the first documentation of long-term sperm storage in C. punctatum, the advantageous adaptation has been observed in other sharks (and many other animals, including marsupials, insects, and frogs). After mating, some female sharks can store sperm in the tubules near their oviduct–an important reproductive area that helps produce the jelly-like substance that surrounds fertilized shark eggs.

The ability to store sperm gives females the power to produce young regardless of whether or not they are ovulating when mating occurs, and also means a potential pup will have unique genetic contributions from both its mother and its father. This type of genetic diversity is a boon for wild populations. Diversity is critical in maintaining the health of populations–especially those pared down by overfishing, environmental threats, and a lack of potential reproductive partners. Like a monoculture crop destroyed by a single pest species, populations that lack diversity are susceptible to widespread die-off in the face of significant threats.

“Questions remain,” adds Bernal, in reference to next research steps. “We know that several species of sharks have reproductive tricks like storing sperm or reproducing by parthenogenesis in the absence of males, but we need to know when and how these alternate techniques are triggered. Understanding these mechanisms–and how they impact genetic diversity–could be vital for the future of shark conservation.”