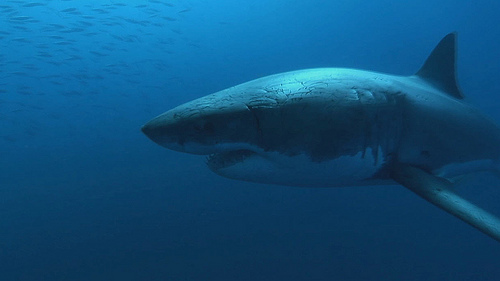 LONDON (UK)- Filmmaker Rufus Elliott is making the documentary ‘When Jaws Came To Visit’. In this film he examines the evidence that the most iconic fish and predator in the sea; the Great White shark, is visiting the coast of Britain during its yearly migration. The hunt for this elusive creature will take the crew all around the British Isles. To do so Elliott needs help. At Please Fund Us you can contribute to his search for the British Great White.

Eighty sightings
With more than eighty reported sightings in the last twelve years the evidence of great whites in UK waters is growing. From credible witness testimonies to intriguing seal carcasses, the momentum continues for the myth of the British Great White Shark. They have spotted as far north as the Bay of Biscayne in France, so why not the British waters, Elliott wonders.

More than a fisherman’s tale
During the film Elliott will revisit the four most credible incidents alongside expert analysis and scientific evidence. Suggesting there is more to this than a mere fisherman’s tale. Elliott will also be leaving a bait and camera, over two days, in ideally two locations-North Cornwall and the Outer Hebrides. The camera can run for nine hours so he’ll retrieve the footage and reset it daily.

Funds
‘Whether we can do both depends on how much money we can raise’, says Elliott in his film on Please Fund Us. ‘One of the eyewitnesses lives deep in the wild Outer Hebrides, the Humboldt squid. This is a logistical and financial nightmare to get to. So if we exceed our target funding we can definitely do the Outer Hebrides, instead of a phone interview or an interview in a more feasible location. Filmmaking shouldn’t be easy anyway!’

Read more about ‘When Jaws Came To Visit’. or watch the video below: